How can you stay healthy through this model?

Recently, a female 42 y.o. patient came to me.  She is underweight, malnourished, fatigued with a constant headache that prevents her from enjoying life, her 2 young children and it has caused some marital discord.  In addition, she has chronic lyme disease and has spent thousands of dollars and seen some of the top specialists in the Northeast.  She has made little to no progress and has become depressed and anguished at the idea of living life feeling so badly.   Using our 5 level model, I immediately knew we wouldn’t make much progress by only focusing on the physical level.  She has been doing just that for years.  At one time, she was taking 35 different supplements per day,  was eating only raw and worked out 3 times a week.  She experienced marginal improvement.  She said she was sick and tired of doing all these treatments and nothing was working.  I knew immediately we had to look at a different level.   Using the NES (nutri-energetics system)  the scan showed  an issue around profound loss, family, & deep woundedness.  As soon as my patient saw the results her eyes filled with tears and she told me she had lost both her father and mother within the past 3 years.  Her mom’s passing was sudden and unexpected and she still had deep sadness and guilt over the unhealed relationship she had with her mother when she died so unexpectedly The NES system is based on the idea that Information and Energy Control Biology http://www.hunterdonholisticcenter.com/more_nes 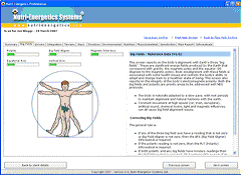 The NES analyzes your body-field and identifies any problems. The scan revealed where in her biofield the energy was stuck. The concept is simple. Imagine the body as a computer. The body’s cells and body parts are like hardware. This has been very well studied by Western Medicine over the last 100 years with little current understanding over what actually controls the body. What has been ignored is the body’s information system or its ‘operating system’ and ‘the energy’ (or software) needed to run the system. She said this was the first she was able to “tell the truth” about her pain and sadness in a very long time. Once we begin to work our way through this “pain journey,” she will be able to heal enough to free the energy for her “physical” body to begin to respond.  We have a long way to go but the prognosis is favorable and we are moving to a “cure” not a “coverup.”